Analysis of the FX indices has been a valuable tool for me with my trading of FX, Stocks and Options for a number of reasons. A quick look at charts of the FX Indices can give me:

An example of how I would use the indices to help track trade direction on currency pairs is given below along with charts.  Note: The vertical dotted lines on the chart separate each month.

A look at the daily chart for the GBP/USD for August 2011 shows that this pair was pretty choppy and with no real clear direction.  (see G/U chart below). 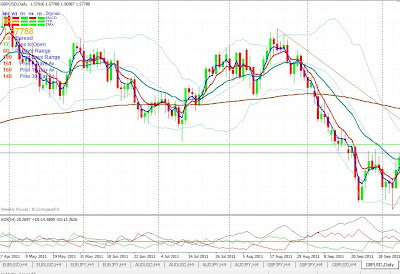 A look at the USDX chart for this same period of August 2011 shows that it was also fairly choppy.  (see USDX chart below). The USDX had been trading during this time within a symmetrical triangle and, according to triangle theory, was more likely to eventually make a break out, either up or down.  From this chart you can then see that the USDX did indeed break out, in an upwards direction, at the beginning of September. The ADX indicator (bottom of chart) supported the direction of the USD trend as being Long (or, moving upwards) from the beginning of September.  This observation would then give a trader more confidence with tracking the direction of US currency pairs.

So, looking back up to the GBP/USD chart for the start of September then you can see that the new trend for this pair was down, that is, Short for the GBP (and Long on the USD).  Thus, this new trend on the GBP/USD was supported by observations made from looking at the USDX chart.  That is, look to go Long on the USD, relative to other pairs.

In summary, if the USDX is trending up, look for confirmation to trade Long on the USD, relative to other currencies, especially those that make up the index.  If the USDX is trending down, then look for confirmation to trade Short on the USD.  The same theory applies to the Euro dollar index, EURX, in confirming EUR trade direction.