Home | US stocks pull back: was that it?

US stocks pull back: was that it?

The S&P500, DJIA and NASDAQ are three major US stock indices that have recently broken up through significant resistance levels following lengthy range bound periods. Global stocks have pulled back over recent weeks however and, although the NASDAQ has tested its breakout zone, I had been looking for a deeper purge on the S&P500 and DJIA with the hope of testing the key breakout levels on these indices. The broader markets are still waiting on US Fed news about the timing of any US interest rate hike and, then, to see how this impacts many trading instruments. This news, when it eventually comes, may rattle stock markets lower but, if not, I'm starting to wonder whether we will get back down to these key breakout levels.

S&P500 monthly: The last major breakout on the S&P500 resulted in a significant rally BUT not before the breakout level had been tested and held and this is shown in the green box on the chart below. The blue box represents recent trading with the top of this box being the 1,600 level. The 1,600 level was broken back in May 2013: For the last two years I have been writing about, and waiting for, a test of this 1,600 level on the S&P500, as per the previous breakout and test. This was how the S&P500 chart appeared in one of my June 2013 post updates: 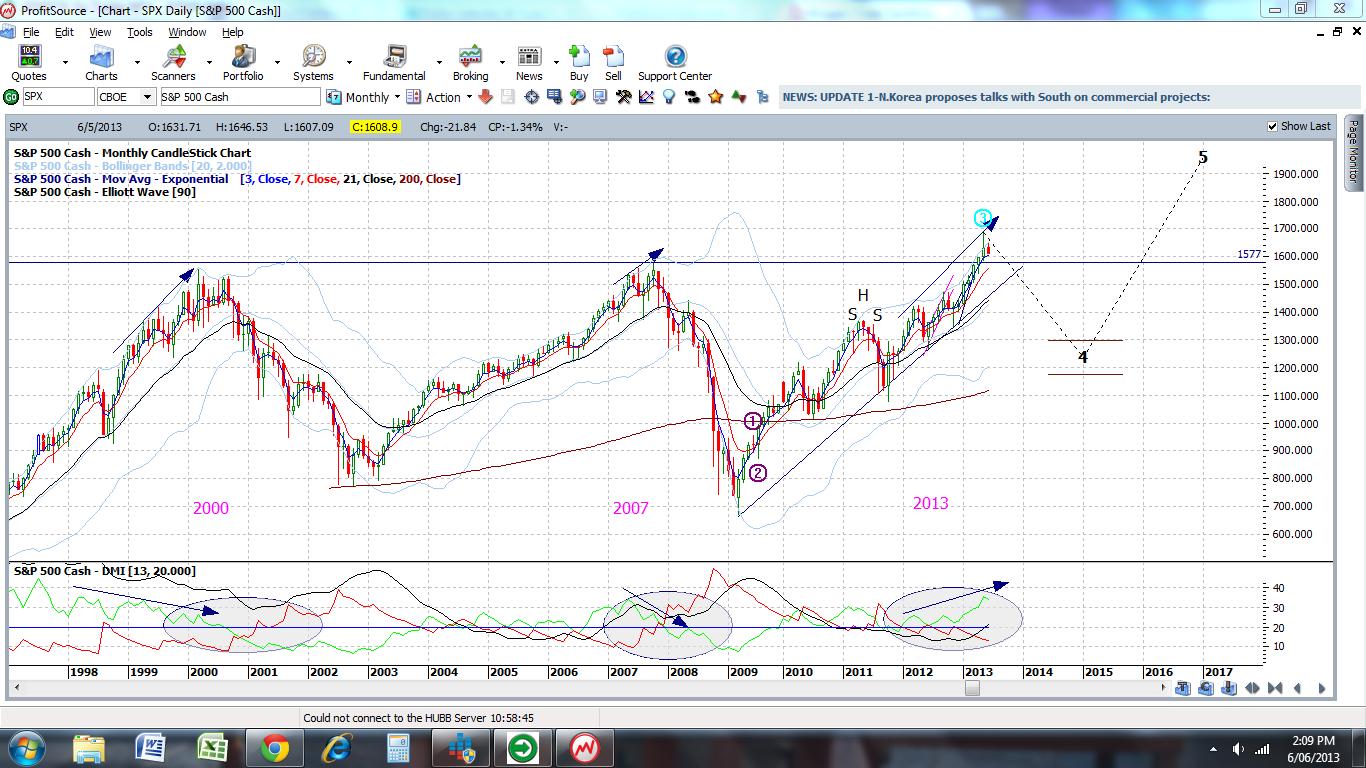 This is how the S&P500 monthly chart appears to day and I'm still waiting for a test of this 1,600 level! Daily support has recently been broken but monthly support is holding for now. Any break and hold below this monthly support would have me more encouraged about a possible test of 1,600. I really won't be confident about the sustainability of ANY stock rally until this 1,600 level has been tested and held: DJIA monthly: this too has yet to test the broken trend line but is holding above monthly support for now. Any close and hold below this trend line though would have me looking for a test of this key 14,000 level. I really won't be confident about the sustainability of ANY stock rally until this 14,000 level has been tested and held: NASDAQ monthly: the NASDAQ recently broke the 4,800 level but, as this has already been tested, we now need to see it hold: Summary: I am keeping an eye on the monthly support trend lines on the S&P500, DJIA and NASDAQ. Any close and hold below the S&P500 and DJIA monthly trend lines will have me looking for a test of the key breakout regions. These are the 1,600 level on the S&P500 and the 14,000 level on the DJIA. Tod Gordon believes these markets need a bit more time to sort themselves out and I tend to agree and suspect that this may take until after the dust has settled following any Fed interest rate hike news. Until then, I'm keeping an open mind with these markets.

One response to “US stocks pull back: was that it?”